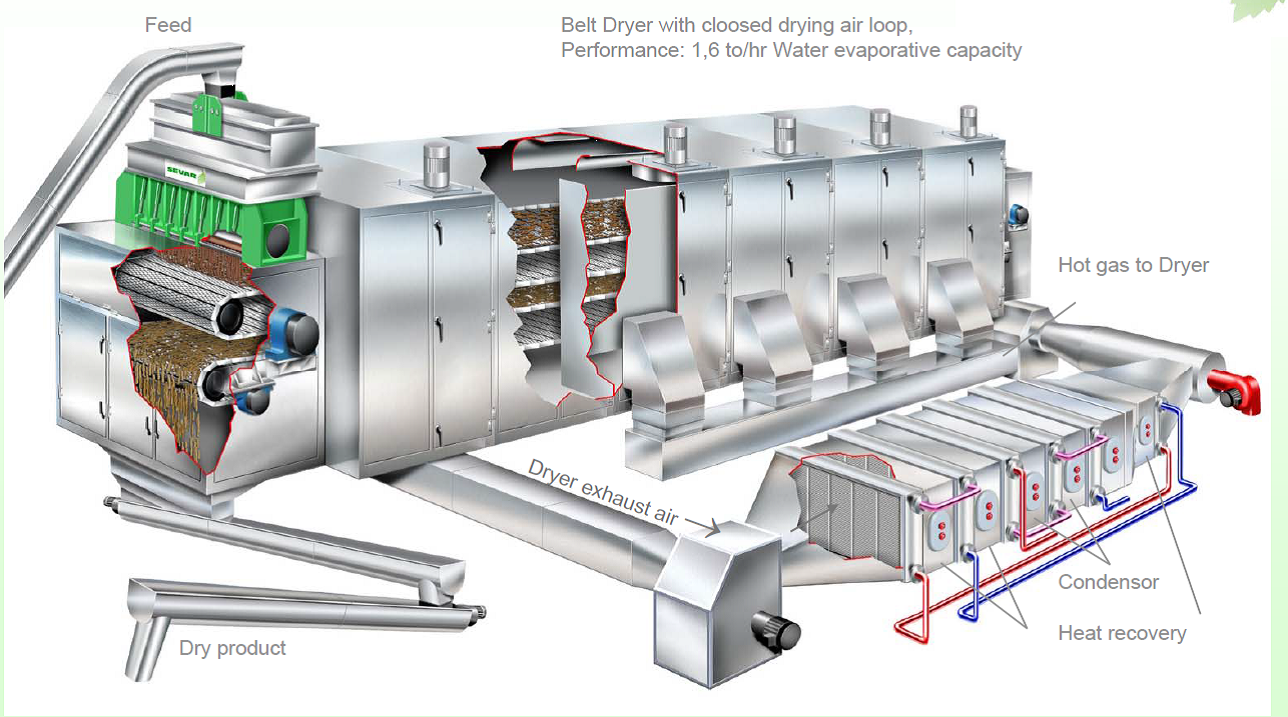 Designing properly a dryer able to deal efficiently with wastewater treatment sludge is far from obvious. This is mainly due to the complexity of the sludge, whose drying properties are affected by a lot of factors: origin, history of treatment, storage duration and conditions, etc. Moreover, the efficiency of the process will also depend on the drying technology, i.e. convective, conductive or solar, that can be more or less suited to the sludge properties. Even though some practical problems have been encountered in some industrial drying plants, their diffusion remains limited so that many operators still have to face difficulties with regards to sludge drying. This paper aims to highlight and gather some of these difficulties, based on experiments realized at lab-scale.

Introduction to the sludge context

The constituents removed in a wastewater treatment plant (WWTP) include screenings, grit, scum, solids and biosolids collectively called sludge. Of all these constituents, biosolids produced during the biological treatment represent the largest amount in volume. Indeed, an excess of biomass generated through the assimilation of biodegradable materials by a flora of microorganisms has to be removed from the system. One considers that the treatment of the wastewater of one so-called ‘population equivalent’, PE, will produce annually between 15 and 20 kg of sludge, expressed in dry matter. However, these solids and biosolids are in the form of a liquid or semi-solid liquid, containing from 0.25 to 12 percent solids by weight. According to the regulation, the sludge is a waste product that has to be first treated and then reused or disposed by the municipalities. Besides available technologies, the selection of the optimal sludge management strategy should take into account legislation, economy, culture and social structure of the society (Poulsen and Hansen 2003, Bengtsson and Tillman 2004). In the European Union, where about 13 million tons of municipal sludge (expressed as dry matter) are expected to be produced yearly from 2020 (Ltd Milieu, WRc et al. 2010) the main valorization ways are represented in Fig. 1. Agriculture and composting allow recovery of the available nutrients in a reuse approach. Incineration refers to the various ways of recovering energy from sludge, mainly by using sludge as a fuel or co-fuel in cement kilns, coal-fired power plants, municipal waste incinerators and mono-incinerators. Sludge gasification or pyrolysis processes are still under development or exist only at small scale. The part related to landfilling is continuously decreasing within the European Union according to the European Landfill Directive, which stipulates that material with an organic content greater than 5% must no longer be disposed to landfill (European Community 1999). Other methods of sludge treatment and disposal are wet oxidation, storage and dumping at sea, this latter being now prohibited in Europe. 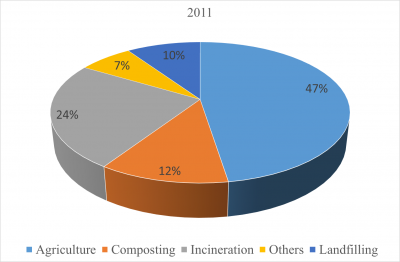 Within WWTPs, the first series of treatment applied to sludges consists in reducing their water content by thickening, conditioning and mechanical dewatering, reaching water contents greatly depending on the technologies (from 18 to 35% DS). Fig. 2 shows a typical example of dewatered sludge after transportation towards a container.  Nevertheless, the use of a drying step has gained a lot of interest, and is even considered as an essential step after mechanical dewatering, prior to agricultural or energy valorization. Conventional combustion technologies require a minimal lower heating value (between 6 and 10 GJ t-1) to compensate thermal losses and the phenomena of incomplete combustion, a minimum which can only be reached by partial drying of the mechanically dewatered sludge. Sludge drying is also of interest for countries still promoting sludge use in agriculture. Indeed, drying produces dried pellets which are easy to store, handle and transport, on contrary to pasty dewatered sludge. Moreover the product is stabilized due the low water activity and will not produce bad odors along the fields. Destruction of pathogens may even be reached provided the drying temperature and the residence time are high enough. The number of sludge drying facilities is continuously increasing worldwide, reaching about 1500 lines (Chabrier 2010). Fig. 3 shows a typical industrial convective belt dryer. 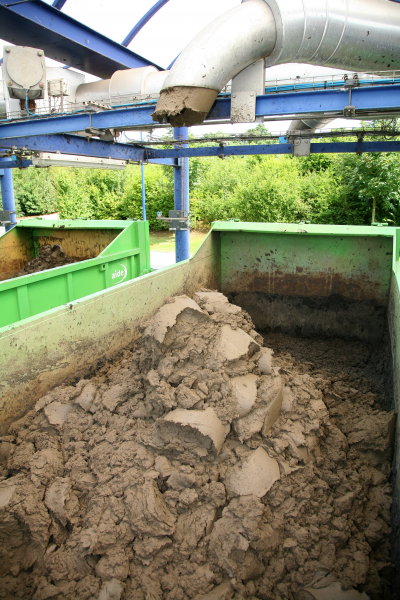 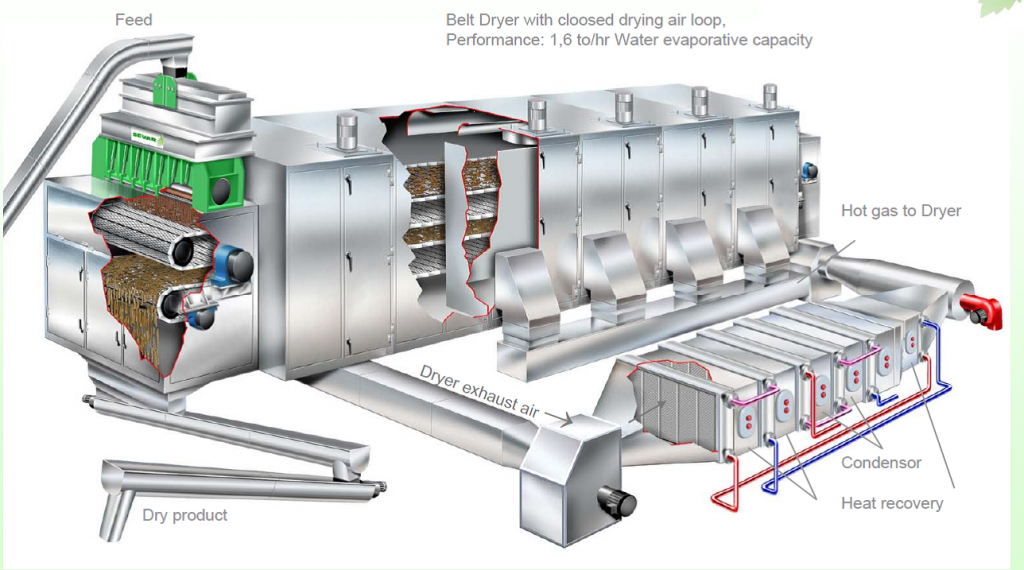 Sludge: A complex material to dry

Most sludge dryers have evolved from standard drying processes, but adaptation of existing technologies is not straightforward owing to the unusual stickiness of the sludge (for indirect dryers) or to the unpleasant odors and risk of explosion (for direct dryers). Nowadays, few companies possess expertise and successful experience in thermal processing of sewage sludge. Dryer design relies too often on empirical considerations, sometimes leading to inefficient systems, unable to face sludge properties changes due to any modification within the WWTP. More details about sludge dryer performances can be found elsewhere (Arlabosse, Ferrasse et al. 2014).

Sewage sludges are quite different from the products usually dried in industry. Sludges are heterogeneous mixtures of microorganisms, mineral particles, colloids, organic polymers, cations, fibers, etc., where the composition varies considerably depending on the origin, the season, and so on. Fig. 4 illustrates the impact of the origin on the convective drying behavior of sludges, with a maximum drying flux varying by a factor 3. These results were obtained in a so-called micro-dryer specifically designed to treat samples of a few grams (Fig. 5). 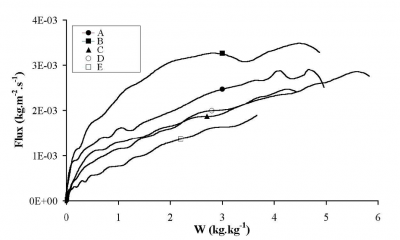 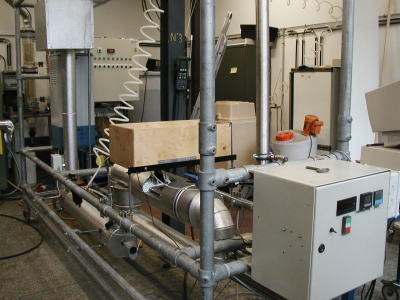 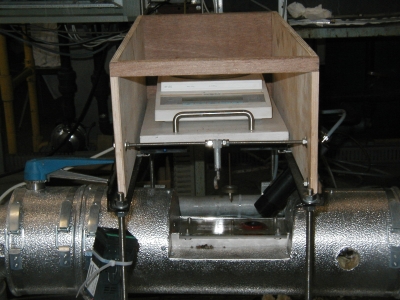 Sludges are also characterized by complex rheological properties, evolving with their water content as indicated in Table 8.3. The so-called glue phase is the most documented one, as it can dramatically affect the operation of indirect dryers, potentially leading to damage to equipment (Ferrasse, Arlabosse et al. 2002), affecting the hydrodynamic characteristics of the dryer, the gas to solid contact area, and the local solids hold-up. Moreover, also other problems in relation to sludge rheology are encountered, such as pumping and liming.

Fig. 6. shows that the simple passage of sludge through a cavity pump completely deteriorates the drying behavior resulting in a significant decrease of the drying rate. These results obtained with a discontinuous pilot scale convective dryer (Fig. 7) confirmed earlier observation by industrial dryer operators. Fig. 6 also shows that the addition of lime, as well known sludge stabilization step, acts as a texture strengthener and can partially counteract the negative effect of pumping. The way the liming step is carried out, either before dewatering ‘pre-liming’ or after dewatering ‘post-liming’, has also an impact as illustrated by Fig. 8. The texturing effect of lime is partially lost during post-liming due to shear stresses produced by the mixing device. This negative effect of mixing has also been recently observed in a work aiming at producing new biofuels by mixing sludge and sawdust (Li, Fraikin et al. 2015, Li, Plougonven et al. 2015, Li, Plougonven et al. 2015). 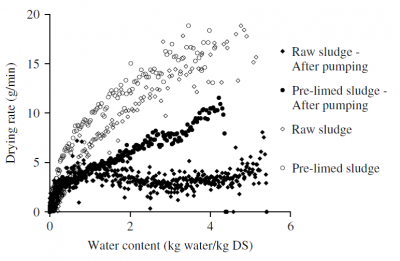 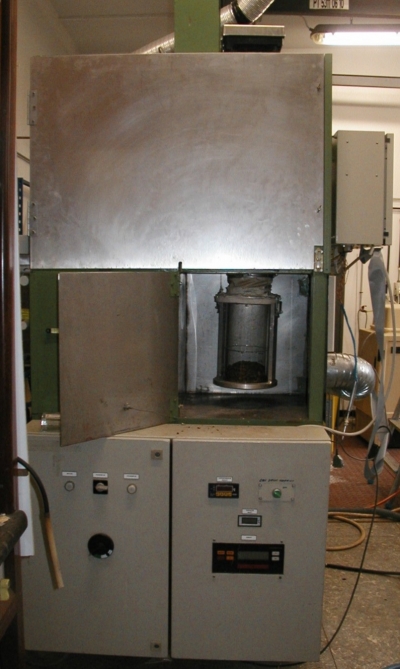 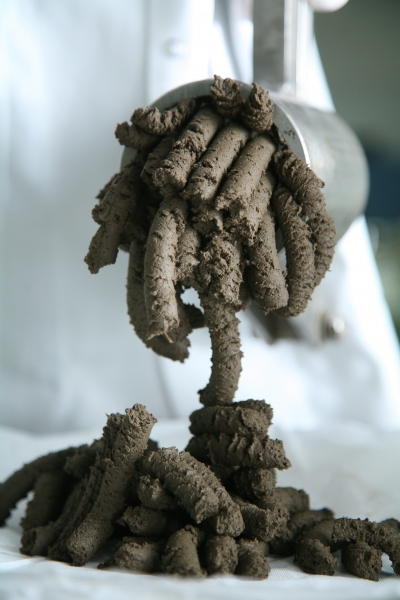 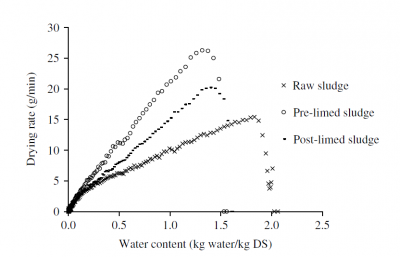 Moreover, specific phenomena may occur due to the organic content of sludges. On the one hand, the product can evolve during storage due to both aerobic and anaerobic fermentation, affecting rheology and drying behavior (Fraikin, Herbreteau et al. 2010). On the other hand, heating induces break down of part of the organic matter, leading to the emission of volatile organic compounds and malodorous substances such as hydrogen sulfur (Ferrasse, Chavez et al. 2003, Leonard, Martin et al. 2007, Deng, Yan et al. 2009, Fraikin, Herbreteau et al. 2010). The non-condensable parts of the vapor have to be treated in bio filters, bio washers, absorption/adsorption facilities or by thermal oxidation while the condensates are sent back to the head of the wastewater treatment plant.

These drying characteristics, along with the legal status of waste, illustrate traditional problems in drying, like the energy consumption or the dryer design.

Drying constitutes a crucial step upstream from incineration or agricultural use. But efforts have to be made to optimize the whole treatment chain, from sludge production, dewatering, drying to energy recovery. Each stage and their coupled effects have to be examined for the design of sustainable “zero energy wastewater treatment plant”. One of the most challenging parts remains the better understanding of the mechanisms governing sludge drying, depending on sludge origin and previous treatment. Any improvement of the knowledge in this area should lead to the conception of dedicated sludge dryers in a more rational way, contributing to success of the whole valorization process.

Bengtsson, M. and A.-M. Tillman (2004). “Actors and interpretations in an environmental controversy: the Swedish debate on sewage sludge use in agriculture.” Resources, Conservation and Recycling 42(1): 65-82.

Ltd Milieu, WRc and RPA (2010). Environmental, economic and social impacts of the use of sewage sludge on land – Part I: Overview Report.